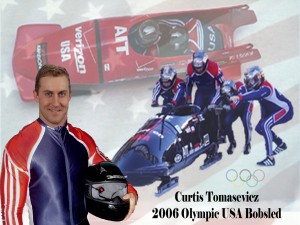 Curt began the sport of bobsledding in 2004 and made an appearance in the 2006 Olympic Winter Games in Torino, only two years after his debut as a bobsledder. He placed sixth in four-man in Torino, Italy, with driver Steven Holcomb. Tomasevicz has won the U.S. Nation Push Championships the past three seasons. He won his first World Cup gold medal with driver Steve Holcomb in Cesana, Italy in 2007. Curt began his first attempts at driving in the U.S. Team Trials in October 2007 and has competed in a few America’s Cup races earning a bronze in Calgary in 2008. In 2009, Curt won the gold in the World Championships as a member of the 4 man bobsled team, the first time the US has taken the title in 50 years. He also won bronze earlier this year in the World Championships along with teammate Steve Holcomb and silver at the World Cup event in Whistler, the site of the 2010 Olympic Games, as a member of the four man team with sled “Night Train”.