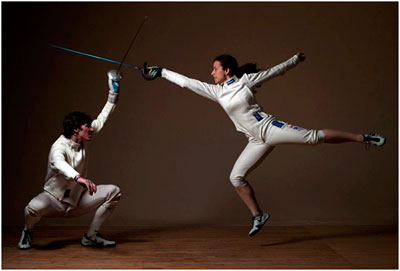 For the past three years she has fenced on the U.S. National Women’s Saber Team and placed 15th in women’s saber at the 2009 World Championships in Antalya, Turkey. She won a silver medal in the individual event at Pan American Championships in 2009 and a bronze at the World Cup and Olympic Qualifier in Gand in June of 2011. She has helped the American Women capture gold at the last three Pan American Championships in the team event. She is a three time Junior Olympic Champion and has a silver, two bronze medals and two fifth place finishes at Junior World cups in Spain, Ukraine, and Poland. She was captain of the fencing team at Columbia University and won every college event a fencer can win. She was NCAA Champion in 2007, NCAA Regional Champion in 2009 winning 21 of her 21 bouts, IFA champion in 2007 and won a bronze medal at the NCAA national championships in 2009. She was First Team All Ivy three years. Her final college record was 158 wins and 28 losses. Schneider studied Russian Literature at Columbia. Past awards include National Honor Society and Academic All Ivy at Columbia University. She has worked for Teach For America as an Operations Coordinator and is currently assistant fencing coach at Columbia University, where she is training full time to qualify for the 2012 Olympic team. Schneider is currently coached by Aladar Kogler and fences at the New York Athletic Club.

Born in Berkley, California, Daria grew up in Brookline, Massachusetts within walking distance of Fenway Park. Her dream of excelling in a sport began when Brandi Chastain started a media fire storm in 1999. Schneider has participated in many sports in addition to fencing, including soccer, basketball, tennis, softball, track and yoga. Inspired by her first fencing coach, Ariana Klinkov, she shifted her focus to saber. She made the U.S. Junior Women’s Saber team by earning a bronze medal at the junior World Cup in Spain in her sophomore year of high school. Recruited widely, Schneider saw New York as the place to get the training she would need to take her game to the next level and she enrolled at Columbia University where she was NCAA champion in 2007. Despite falling short in a bid for the Beijing Olympics, she secured a spot on the U.S. Senior National Fencing Team in 2009. Since then her results have only improved, with 2011 having been her best season so far!!!