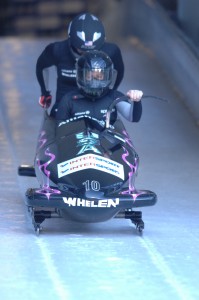 Erin began bobsled as a brakeman in 2002, joining the World Cup team to push for drivers Bakken, Rohbock, and Sprung. In January 2005, Pac was recognized along with the U.S. Women’s Bobsled Team as the USOC Team of the Month. During the 2005-2006 season, she learned to drive and made her World Cup driving debut just one year later during the 2006-2007 season. Pac continues to climb in the international rankings, recently claiming a bronze medal at the inaugural World Cup race in Whistler, Canada.