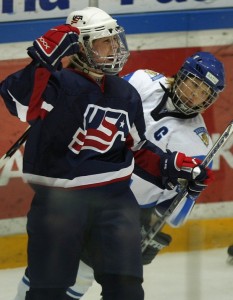 Molly is a 2006 Bronze Medalist who always dreamed of making the US team since she was a kid. Engstrom was a member of the 2009 and 2005 World Championship team. She was named Western Collegiate Hockey Association’s Defensive Player of the Year in 2003 and 2004. While at the University of Wisconsin, Engstrom finished her collegiate career ranked third in the country for defenseman with 21 career points. To keep up with her older brother, Molly began playing hockey in the first grade and she looks forward to competing in the 2010 Games in Vancouver.