Ochocinco Fined: Save the Dollar, Save the Fine, Support LASIK the Refs!

Ochocinco Fined: Save the Dollar, Save the Fine, Support LASIK the Refs! 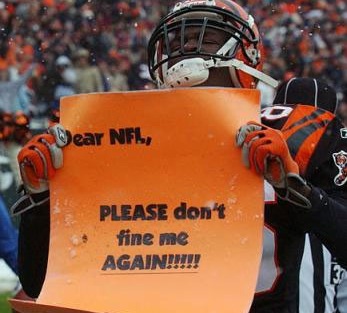 Chad Ochocinco was fined by the NFL AGAIN today for $20,000!  The infraction?  According to the Huffington Post:

During the third quarter of Cincinnati’s 17-7 win over the Baltimore
Ravens, officials initially ruled that Ochocinco got both feet down at
the sideline for a 15-yard catch. The Ravens challenged, and the call
was overturned when replays showed the receiver’s toe landed on the
white sideline.

While the play was under review, Ochocinco walked toward the officials with the dollar bill.

Ochocinco said he was just having fun, but the league didn’t like it.

Ray
Anderson, the league’s executive vice president of football operations,
sent Ochocinco a letter that said: “The very appearance of impropriety
is not acceptable. Your conduct was unprofessional and unbecoming an
NFL player.”

The letter cited league rules that prohibit abusive, threatening or
insulting language or gestures toward officials. The letter also noted
that players are prohibited from taking items onto the field that are
not part of their uniform. The league has cracked down on players using
props for celebrations.

In response to the fine, the company that made Ochocinco’s iPhone
application said it will donate an additional $20,000 in the receiver’s
name to the Hillview Acres home for abused children in Chino, Calif.
John Shahidi, the president and CEO of Rock Software, Inc., has
assisted the home.

Chad, we have a better solution, after the next controversy, donate free airfare to the ref who blew the call.  Fly them to New Jersey where they can get their free LASIK surgery as part of EyeCare 20/20’s LASIK the Refs Program!