Yesterday’s visit by LASIK for the Gold’s Erin Pac, and teammate Elana Meyers, the Bronze Medal winners in the bobsled, was featured on the front page of today’s Daily record! 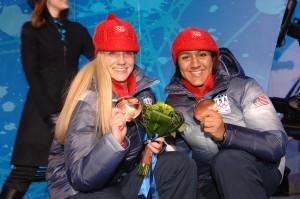 Here is the article:

Olympic bronze-winning bobsledders
Erin Pac (left) and Elana Meyers visit Monday with Dr. Cary Silverman of
the EyeCare 20/20 center in East Hanover. Meyers was there to get free
LASIK surgery but her thin corneas ruled her out as a candidate. (STAFF PHOTO: JOHN BELL)

Olympic bobsledders say thanks to E. Hanover eye doc – even though
one can’t get surgery

EAST HANOVER — Olympic bobsled medalists Erin Pac
and Elana Meyers were at the Eagle Rock Avenue office of EyeCare 20/20
on Monday, where they signed autographs and posed for photos.

The dozens of people who
came to meet the pair had the chance to hold the bronze medals they won
in the Vancouver Games this year.

But the main purpose
of the visit — Meyers getting LASIK eye surgery — never happened.

During screening Monday, Dr. Cary Silverman realized Meyers’ corneas
were too thin and she was not a candidate for the vision correction
surgery, which Silverman offers for free to Olympic-level amateur U.S.
athletes. So Meyers was still wearing glasses and greeting visitors at 2
p.m. when she had planned to be getting prepped for surgery.

Pac, 29, and Meyers, 25, comprised the two-member U.S. bobsled team
that finished third this year, with two Canadian teams winning gold and
silver. Pac, the driver, got LASIK at EyeCare 20/20 a year ago and
returned to East Hanover for the appearance.

Meyers, the
brakeman who flew to the township from training in Lake Placid, N.Y.,
took the news of her too-thin corneas in stride, and said she was
grateful Silverman offers the procedure to Olympic hopefuls for free.
She said she couldn’t have afforded it on her own. And she sees herself
as having benefited from Pac’s LASIK-improved vision.

“I’m the eyes and hands of the sled,” said Pac, a resident of Farmington, Conn.

An avid sports fan, Silverman started LASIK-for-the-Gold in 2008 to
help top U.S. athletes who participate in sports that don’t typically
offer opportunities for serious financial gain, including luge, BMX,
speed skating and pole vault. He has performed the vision correction
surgery for 11 athletes so far. Of Team USA’s 37 medals in Vancouver
this year, seven were won by athletes who got LASIK from Silverman,
according to the program.

Even at the elite level, Pac
and Meyers said, bobsledding is still an “amateur” sport, with little
hope of sponsorships.

“We’re not rolling in diamonds or
blinging out or anything like that,” Meyers said. “It’s not lucrative,
let’s put it that way.”

Meyers said she will be “working
like crazy” this summer, including as a trainer at a Gold’s Gym near
where she lives in Douglasville, Ga.