Special Goggles May Have The Power To Spot Strokes

Special Goggles May Have The Power To Spot Strokes

Our eyes have an amazing way of uncovering many other serious problems that may occur throughout the rest of the body. For instance, in people who suffer from stroke―one of the leading causes of death in the United States―the first identifiable symptoms will often involve vision problems. These symptoms will typically impair a person’s vision and cause dimness, blurriness or vision loss.

Given just how serious strokes are―on average, one American dies from stroke every four minutes―identifying these symptoms early on through our vision can help prevent serious health problems from occurring in the future, and could even help stop a life-threatening stroke from developing further. 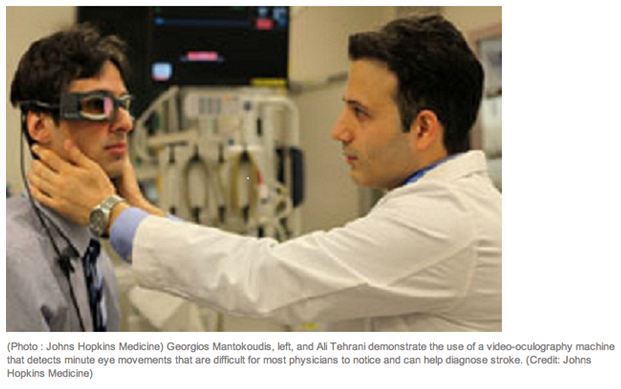 In fact, identifying stroke symptoms early on is so important that doctors found that patients who arrived at the emergency room within three hours of their first symptoms were often healthier three months after a stroke than those whose care was delayed.

So, just how can you identify stroke symptoms when they are first developing? Some doctors are looking towards a new device that looks like a pair of swimming goggles, but instead could save tens of thousands of lives every year through looking at vision problems associated with stroke.

These special goggles are equipped with an infrared camera that is attached to a cord, which then goes to a laptop computer to measure the eye’s movements.

According to St. David Newman-Toker, who is leading the study of this new technique, “The eye movements (when) patients present with strokes in the back part of the brain — and that’s about one out of every four strokes — the patients present with dizziness and vertigo and we can tell from their eye movements whether they’ve had a stroke or whether they have a benign inner-ear condition, quickly and easily.”

“They’re measuring the state of how the brain is working and that changes immediately in the middle of a stroke,” Newman-Toker said. “When there’s a lack of blood flow to the brain, immediately the eye movements change. It takes a little bit of time before the structure of the brain starts to change from the stroke, that’s actually the window of opportunity to intervene, so it takes hours for the MRI, actually a couple of days for the MRI to really show up these strokes some of the time. We’ve seen false negatives up to two days.”

These goggles could be very beneficial for the millions of patients a year who walk into the emergency department with dizziness and balance symptoms. While only about 5% of these patients have strokes, finding them early could be the difference between life and death.

What do you think about this new technology that could be used to help uncover strokes? Do you think this could be a big breakthrough for 795,000 people in the United States who have a stroke each year? Let us know your thoughts in the comments below.