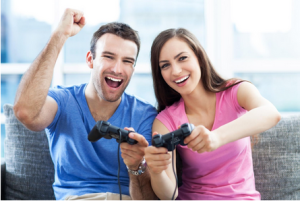 In today’s society, videogames often get a bad reputation. When used excessively, they can lead to decreased activity levels and human interaction. When used strategically, however, they can be utilized as a tool to treat lazy eye and bring hope to the visually impaired.

Lazy eye, also known by the scientific name of amblyopia, is a childhood disorder that affects 2-3% of the population. As a result of underdeveloped nerve pathways between the brain and the eye, the brain favors the stronger eye over the other, sometimes causing it to wander. If left untreated, the brain may begin to completely ignore the signs that the weaker eye is sending to it, eventually resulting in lack of balance and poor depth perception.

Traditionally, eye patches have been placed over the stronger eye in an effort to strengthen the weaker eye and force it to work. This treatment, however, doesn’t force the eyes to work together, which can cause problems with binocular, or 3D, vision once the patch is removed.

Prior research has found that videogames can improve decision-making speeds and the brain’s capacity to learn, so scientists were inspired to create their own computer game. This scientific creation aims to improve depth perception and binocular vision for people who have a lazy eye. Unlike the traditional eye patch used to treat the disorder, participating in this newly developed videogame treatment encourages both eyes to work together.

The videogames themselves were created by Teng Leng Ooi, a professor of optometry at Ohio State University, Zijang He from the University of Louisville and Yong Su of Salus University in Pennsylvania. They include a Pac-Man style interface where a cat and mouse are chasing after each other, searching for a prize. A “push-pull” technique, which exposes the weaker eye to complex images, is incorporated into the interactive game to force both eyes to work together at all times.

The training provided in the videogames targets important nerve pathways in the brain, whose underdeveloped state caused the lazy eye to begin with. By wearing a pair of 3D glasses, images can be filtered differently to both eyes, treating the dominant and weaker eyes distinctly. The stronger eye is stimulated with a screen of horizontal lines, while the weaker eye is pushed harder with vertical, horizontal or diagonal lines imposed over the same horizontal lines that the stronger eye is seeing.

At first glance, videogames may seem like a farfetched idea for improving a lazy eye but, in the pilot test, the vision of two adult research participants with lazy eyes improved from 20/25 to 20/20 and 20/63 to 20/50, and lasted for the eight months following the treatment that they continued to be studied.

The videogame, and its supporting research, is supported by the National Institute of Health, meaning that it may become a staple in lazy eye treatment in the near future.

Check out the EyeCare 20/20 blog, for more updates on advances in the field of ophthalmology.