What is Glaucoma? Read About Glaucoma Symptoms and Treatment

Glaucoma is a group of eye diseases involving progressive damage to the optic nerve accompanied by a build up of pressure inside the eye. There is no cure for glaucoma, only treatment and management of symptoms at our northern New Jersey eye care center. If left untreated, glaucoma can result in significant vision loss and even blindness. 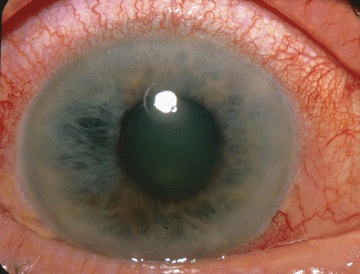 A balance of fluids inside the eye maintains intraocular pressure. The first type of fluid, called the vitreous, fills the vitreous cavity at the rear of the eye. The second fluid, the aqueous humor, fills the forward chamber at the front of the eye.

As it is continually produced and circulated throughout the forward chamber, the aqueous humor both nourishes the lens and cornea and removes debris as it drains. When healthy, the eye will produce aqueous humor at the same rate that the fluid is drained.

Aqueous humor drains from the eye through a system found at the angle formed where the iris and cornea come together. The aqueous humor is filtered through tissue called the Trabecular Meshwork and passes into the Schlemm’s canal where it eventually enters the bloodstream. If drainage is impeded anywhere along this system, then the aqueous humor is unable to recycle normally and pressure begins to build up in the eye.

It is the gradual build up of this pressure that coincides with the progressive optic nerve damage associated with the onset of glaucoma.

There are several types of glaucoma, and physicians do not entirely understand all of the underlying causes. Glaucoma is typically associated with increased eye pressure, usually brought on by poor function of the eyes’ natural drainage and filter system. However, even an increase in pressure build-up does not always indicate the presence of a potential problem. People with normal to low eye pressure have experienced vision loss while others with above normal to extreme pressure levels have not sustained any apparent damage to their optic nerves.

Currently, there is no cure for glaucoma, and the damage the disease causes cannot be reversed. With treatment, glaucoma can be controlled to slow or prevent further damage. In addition to various eye drops and medications, laser and/or conventional surgery techniques offer other glaucoma treatment options available at our northern New Jersey practice. One successful type of surgery utilized by our physicians is Selective Laser Trabeculoplasty (SLT).

This new surgery is quite effective in treating the more common primary open-angle glaucoma. The procedure uses short, ultra-low frequency pulses of laser light focused on pigmented cells in the Trabecular Meshwork to restore proper drainage and relieve IntraOcular pressure. The surgery is performed as an outpatient procedure and takes approximately 15 minutes to complete.

Endoscopic cyclohotocoagulation is a recent development in the treatment of various types of glaucoma. In this procedure, the ciliary body, that portion of the eye responsible for producing fluid, is targeted with a precision laser. The energy generated by the laser effectively reduces fluid production. As the volume of fluid decreases, so does the IntraOcular pressure and the complications it can create.

Dr. Silverman and the team at EyeCare20/20 strive to combine a personal touch with some of the most advanced eye-care technologies and treatments available today. Conveniently located in East Hanover, NJ, for over 25 years we’ve helped hundreds of people improve their eyesight.

Visit our Patient Testimonials for real reviews from our satisfied patients.

For more information or questions about Glaucoma treatment, schedule an appointment. Call us today at (973) 560-1500 or fill out the quick contact form on the left. We will get back to you as soon as possible because helping patients is our #1 priority.