A highly contagious form of pink eye caused by airborne viruses that are easily spread via sneezing and coughing. Pink eye is an infection of the eye in which results from the inflammation of the conjunctiva, the clear membrane that covers the white part of the eye and the interior lining of the eyelids. Pink eye will cause the eyes to be watery, itchy and irritated.

Those infected with conjunctivitis will have a pink eye, accompanied by itching, stinging, burning, irritation, pain, grittiness, crusting and light sensitivity. The way your eye looks and feels will help you determine which form of pink eye you’ve contracted. Viral conjunctivitis is usually present in only one eye (before, sometimes, spreading to the other), which will be excessively watery and sensitive to light. Crusting on eyelids can occur.

Caused by highly contagious but common airborne viruses. People of all ages can contract conjunctivitis, but children get pink eye more often than adults because they are prone to colds and respiratory tract infections, which can be a cause of viral conjunctivitis, and they are often in close environments like classrooms. You can catch viral conjunctivitis through touch, coughing or sneezing. 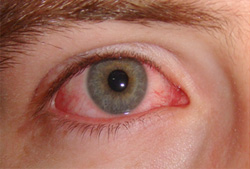